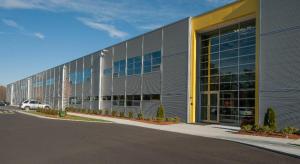 East Providence has experienced dramatic growth in recent years in advanced manufacturing, with a number of high profile manufacturers selecting East Providence to either establish themselves here or grow their existing facilities. One example of this investment is Igus Bearings. The company recently completed its modern and architecturally impressive 160,000 square foot industrial building and has taken steps that could include the development of an additional 80,000 square feet of industrial space in the near future.

Eaton Corporation, a manufacturer of critical components used in the aerospace industry, is leasing approximately 145,000 sf of the existing 340,000 sf building at 10 New Rd.

Eaton employs over 200 people at its East Providence facility and expect to add an additional fifty new employees in the next 3-5 years. Eaton Corporation opened in the East Providence Waterfront District in May of 2013. The East Providence Waterfront Development District Commission was awarded $5 million in funding from the US Department of Commerce Economic Development Administration (EDA) for renovations to the building that houses Eaton. The funding was part of a pool of funding that Senators Reed and Whitehouse helped to create to assist RI businesses that were hurt by the floods that devastated RI in March of 2010. A nanotechnology company headquartered in Northborough Massachusetts, Aspen Aerogels selected a vacant industrial property on Dexter Road within the Waterfront District as the site for its new primary manufacturing facility in 2005. Aspen is a leading manufacturer of high performance insulating materials known as aerogels. Aspen spent $30 million to retrofit the existing 140,000 square foot, industrial building to meet the needs of its commercial, military and aerospace customers. In October 2015, Aspen celebrated the completion of its third manufacturing line at the company’s primary manufacturing facility in East Providence. Governor Gina Raimondo, Senator Jack Reed, Senator Sheldon Whitehouse, and a number of state and local community leaders attended the ribbon cutting ceremony and facility tour. The $30 million expansion is an integral step in Aspen's long-term strategy for growth and will expand the company’s manufacturing capacity at the plant by 25 percent to meet the increasing demand of its customers. In 2008 Nordson EFD, faced with the enviable dilemma of outgrowing its existing manufacturing space in East Providence, had reviewed its options as to where they should locate their new facility. The facility would serve as the America’s headquarters for the company. Thought was given to locating out of state, perhaps in the vicinity of the company’s headquarters in Ohio or in nearby Massachusetts. Ultimately, the company chose to remain in East Providence based on the quality of the company’s existing employees and the availability of a high quality facility that was perfectly suited to the company’s expansion plans. Today, hundreds of workers are employed at the company’s modern facility and the future for the company is bright.